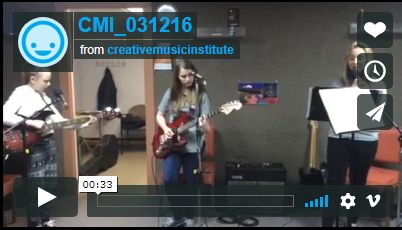 The other kids in the Saturday morning Trio Session played three songs in 90 minutes. There were loud, electric strums as the three girls learned each other's song choices. The original recording plays in the background as the girls put their own spin on the songs. In a few short minutes, the strumming is uniform, both girls hitting the right chords at the right time. The singer gets louder and her confidence increases as the lyrics continue. In a few short minutes the song has gone from new to recognizable, and it is easy to tell the students are gaining ability in what they're doing. There is a pause as the pages are turned and the microphone is adjusted. “That was way better than last week” says the instructor. You can see the singer relax as she realizes she has improved, even if she hadn't realized it before he told her. "Just listen and play the parts you are sure of". All 3 begin to strum the chords and sing along. It's relaxing to listen to the strums and singing as it improves with each run through.  Now there is a short pause for a history lesson, a better understanding of the lyrics of the song "We didn't start the fire", which chronicles 20th Century history events. With half an hour left, the final songs will be the last song of the Session is a recap of David Bowie's. "Space Oddity" and the first song of the day, Car Radio by 21 Pilots.  The set-up is different this time: a drum machine and bass accompany a guitarist and a singer. Last minute adjustments are made as the next Session's students come in to watch. It is noted that the total time the bassist has played the instrument = 7 minutes, “6 minutes last week and one minute this week” It gathers laughs from the audience but also shows the uniqueness of music: you don't have to know how to play an instrument in order to pick it up and try.
- Victoria Durgin