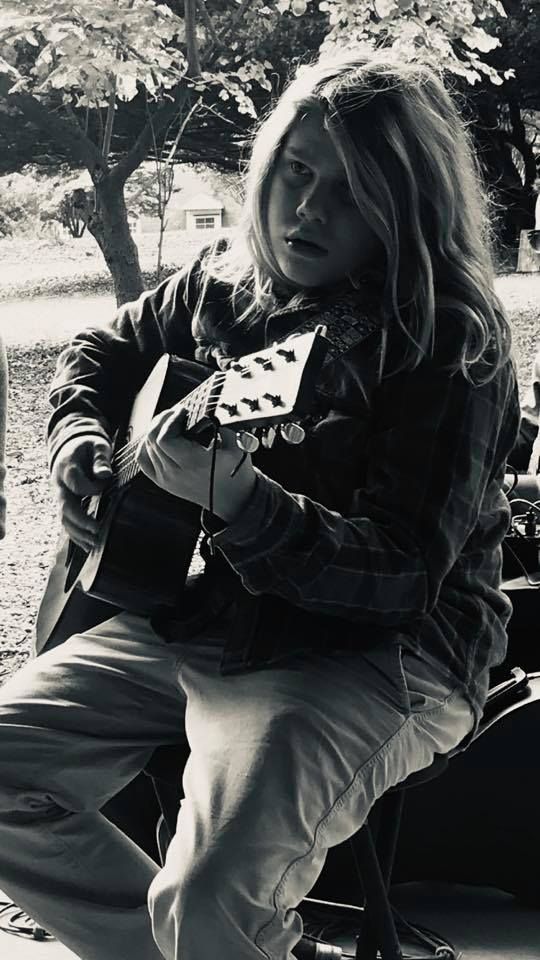 Of all the potential students who apply to Lehigh Valley Charter High School for the Arts, only about 550 make it past the interview and audition process. One of those is a 14 year-old freshman named Rowin Scott. With the help of Creative Music Institute instructor Jack Myers, Rowin was able to play both the melody and the chords of “Now’s the Time” by Charlie Parker for his audition on guitar.

Along with guitar, Scott sings, plays the mandolin, banjo and bass. Rowin has been playing guitar since he was nine. He began playing because he really liked the sound of guitar. Scott writes his own music. He also has a natural ability for improvisation, and soon hopes to soon be able to read music. Scott is currently forming a band with his 17 year-old brother who writes songs and sings. He hopes to be ready to play shows within the next few months.

Rowin likes to take walks in the woods with his friends. He loves his dog and playing guitar and doing live performances. Rowins friends describe him as crazy, nice and shy. Scotts “shyness” fades when he steps onto a stage. He has done multiple live shows; many have been at school and with CMI. On October 13th, Rowin will be playing an instrumental version of Charley Crocketts’ “I Am Not Afraid” at a friends moms wedding, a song about love and commitment; something that Rowin feels is important.

Scott is inspired by guitarists like Jerry Garcia and Trey Anastasio. He listens to rock from every decade, rap, indie and jazz. He admires Kurt Cobain, Phish and Aurora as well as The Talking Heads. Rowin sees himself playing more shows around Emmaus and eventually becoming popular in the music industry. Rowin wishes he could play with David Byrne of The Talking Heads. He hopes to have multiple records within the next few years.

Rowin feels his time at CMI has helped him mature as a musician. John, Justin, and Jack all help him write music and encourage him to play live shows whenever he can. He says everyone is welcoming and it helped him come out of his shell and become a better artist.

Click on this Vimeo Link to hear a clip of:
Rowin Scott jamming on Possum by Phish at Yergey Brewing with CMI Instructor Justin Fischl